Those that walk the Path to Glory seek immortal power from their mercurial master. Yet the will of  Tzeentch is capricious and his Path is strewn with The Lost and The Damned.

Greetings Arcanites! As it’s #WorkInProgressWednesday on the webz I thought I’d share some of the current miniatures on my work bench.

My Slaves to Darkness army for Warhammer: Age of Sigmar continues to slowly grow and evolve. I’ve had less time to blog and paint than I’d like recently (why cant I just paint all day, is that too much to ask, life?). Never the less I’ve been working on these gribbly minions of Tzeentch for a Path of Glory warband. 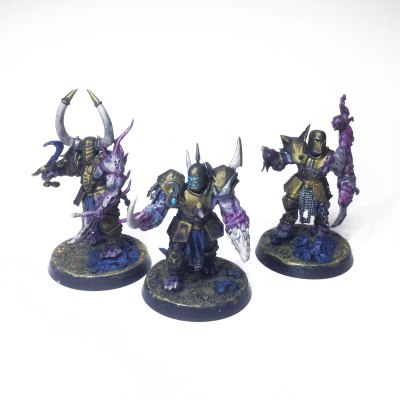 Yeah I know. Forsaken. Models that even when they were released were so laughably bad that I remember saying a cold day in hell was more likely than me ever buying this kit. Then Games Workshop went and put them on Last Chance to buy and in my mind they became collector’s edition! There was something about them that made we want to redeem them. I reasoned that half of the issue was the awkward posing so they could rank up in old Warhammer. Surely 32mm round bases and a bit of cherry picking could fix a multitude of sins? 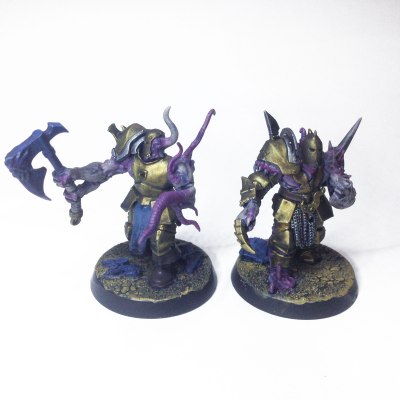 On the whole I quite like the 5 models I’ve assembled. They’re still pretty ugly but I think some sympathetic conversions and curated parts from the (equally lamentable) Pink Horrors kit has improved things. I decided to forego the use of mutated heads in favour of sinister, anonymous helmets like my Warriors of Chaos. I think this has toned them down a bit.

As you can see I’ve just basecoated and applied a wash of Drakkenhoff Nightshade so far, but I have to say that I’m rather excited to finish them off when I can. I still can’t believe I ended up buying this kit at full RRP though – for shame! 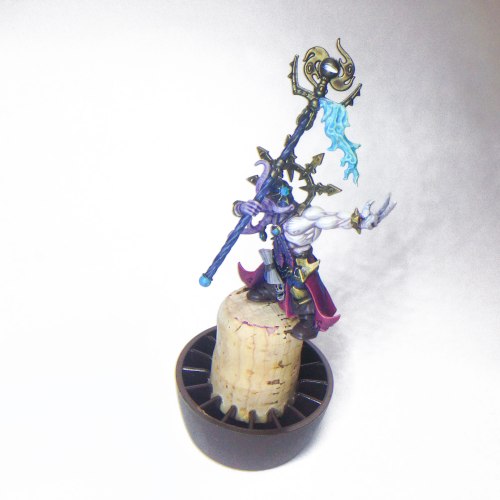 Next up, a conversion I’ve been playing with for a while. This is my custom Tzeentch Warshrine Keeper who also doubles up as a Tzeentch Sorcerer Lord too. Excuse the bad picture, but currently I’m working on layering up the vibrant magenta of his cape and working detail into his skin tone with glazes. Currently known as Balazaan Voidcaller: Magus of the Panopticon I’m enjoying working on his two-tone complexion. His daemonic side is a pallid purple, replete with writhing tentacles which I’m blending into his pale human flesh. I aim to paint and lightsource his flame in the same way as my Chaos Sorcerer of Tzeentch on Disk. 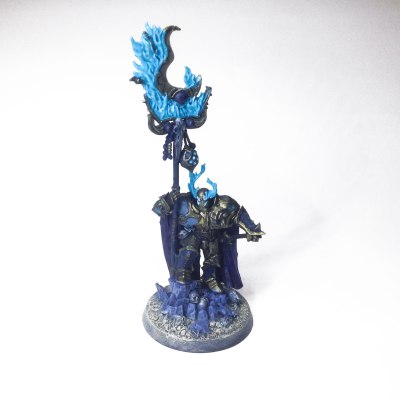 I love this conversion. As soon as I saw the Chaos Lord clampack model I knew I wanted to convert it into an Exalted Battle Standard Bearer. It’s a shame their rules suck in Age of Sigmar – hopefully Tzeench Arcanites will get a Bloodsecrator equivalent in the future. Either way, the model is lovely. If your’e wondering, the headswap is from the Forsaken kit and the banner is a Finecast Blasted Standard with a Dark Angels thurible hanging from it. This as yet unnamed champion is the shepherd to his warband’s flock of Forsaken – his standard an incandescent beacon capable of searing through the madness and battlelust of the damned. 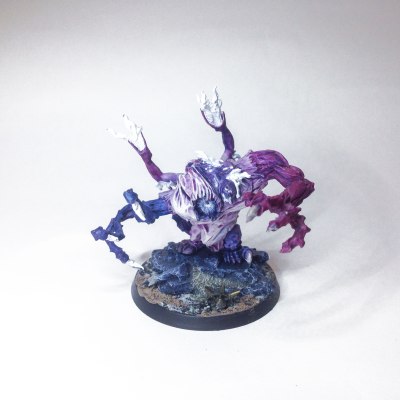 Lastly, here’s a classic gribbly from the early 2000’s! I’ve added to this venerable, metal Chaos Spawn with parts from the plastic Flamers of Tzeentch kit to make what used to be called a Fyrewyrm. When he’s finished he will be gouting flame from his maw which I’ve converted from the Burning Chariot kit.  I’m currently sketching in colours from my army scheme and I’ve built him a cork bark base to elevate him.

Hopefully I will get some of these guys finished and showcased on the blog in the coming weeks. What do you guys think so far? Have you tried Path to Glory in it’s latest Age of Sigmar incarnation yet?